How to Save Money with No-Contract Wireless and Unlocked Phones

It would be easier to count the amount of people you know that don’t have a cell phone than those who do. This has caused a competitive market which is great for you, the consumer, because as the demand for cheap wireless plans continue to rise, the pricing steadily declines.

With the largest wireless companies still charging significantly more for contracted monthly plans (which will most likely lock you into 2 years with the carrier), we are seeing growth in the unlocked, no-contract wireless area. But this growth has left the customer with so many new questions and concerns. Well we plan to answer the most popular questions for you, such as:

What is an unlocked phone?

What is a GSM network?

Can I keep my phone number?

So how does a no-contract wireless plan work?

How much can I save with an unlocked phone and no contract wireless?

Don’t confuse this term with the action of “unlocking a phone.” These devices come unlocked already and are 100% legal. When purchasing an unlocked phone, you have the option to take it to any wireless carrier that utilizes GSM cellular networks.

A locked phone means you buy it from a wireless provider and can only use it on their networks for a set period of time, which is typically a 2 year contract. So, if you decide to go with another mobile carrier, you must buy a new phone, or wait until the contract is fulfilled. 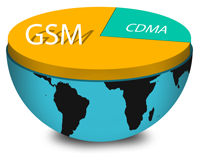 Don’t get too caught up in this, just make sure the carrier you choose utilizes a GSM network. GSM and CDMA are the two largest radio systems used for cell phones in the U.S. with GSM being the world leader in use.

The biggest difference is that a GSM network makes it simple to change carriers by simply buying a different SIM card and placing it in your phone. CDMA networks require a phone to be carrier authorized for use, so to change carriers you’ll need a new phone. Most unlocked phones and no-contract carriers use the most popular GSM networks but it is always a good idea to double check.

A SIM card looks like a small SD card that you would find in most digital cameras. You’ll have to take the back of the phone off to get to the slot that holds the SIM. These cards hold information needed to connect to any individual network and can also store the contacts listed on your phone. You can have as many wireless accounts as you want with the same phone by simply swapping out the SIM cards.

NUU Mobile phones have 2 slots or “dual SIMs,” which allow you to use 2 lines and carry only 1 phone.
Dual SIMs are great for travelers. Since GSM networks are popular worldwide, you can have your normal SIM card in one slot and your destination SIM card in the other, without constantly having to pop open the phone and swap them.
Dual SIMs are great for businesses as well. Who wants to carry around two phones when you can just use the same phone with two SIMs, one for home and one for work, keeping both numbers separate?

Can I keep my phone number?

How a no-contract wireless plan works

At first this seems kind of intimidating because for the most part you are on your own. While you can go to some of the big box retailers or a mall kiosk, it’s is just as easy to do it all from your computer and you don’t even need to wait in line.

You do need to do some research to find the right plan for you and your family, but this will save you money in the long run. The term no-contract is just that. If you use one of these carriers and you don’t like something about them, the coverage area isn’t right for you, or you just want to switch so you can try another carrier, you can. You just pay for a certain amount of service, usually months’ worth at a time and then get a new SIM card from another carrier, place it in your phone and move on.

The process works as follows:

That’s it, you are ready!

In this case buying an unlocked phone and choosing a no contract wireless plan would save you up to $636.01 dollars over 2 years equaling almost $40.00 in savings every month. If you think you are ready to try an unlocked phone, please consider one of our great unlocked Android smartphones.