How to Fix That Google Chrome Crash on Android

The above image “Gnome Face Angry” by GNOME licensed under CC BY 2.0

It’s annoying, and it’s happening to everyone. But there’s a (temporary) solution!

The latest update of Google Chrome is causing the browser to crash on many Android devices.

Here’s what we know so far

Isolated complaints began trickling in last Friday, but the real deluge didn’t flood the Android world until yesterday. Chrome is reportedly the only browser affected — others like Firefox, Opera, and Dolphin continue to work fine.

The Google Chrome glitch does not appear to negatively impact any other phone functions.

How to Fix the Glitch

This isn’t a silver bullet, but it’s the best/easiest option available right now:

If this doesn’t work, repeat steps 1-4. Then tap “Clear Data” instead of “Clear Cache”. 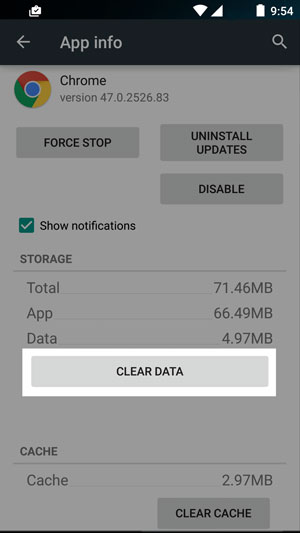 Selecting “Clear Data” may wipe some saved info in Chrome, like user names and passwords.

Some users have reported flawless Chrome performance after following these steps. Others say Chrome will work for a few hours, then crash again.

If Chrome continues to crash, it’s possible to uninstall the glitchy update. In theory, this should make the browser run smoothly again (although we’ve encountered mixed results).

Hopefully Google will release a more “permanent” solution soon. Until then, this fix should get Chrome working for you again.

How Good is 3GB RAM in a New Smartphone Today?