History of Camera Phones: Will Smartphone Cameras Replace Traditional Ones?

At this point, it’s a common analogy that owning a smartphone is like walking around with a computer in your pocket. Wouldn’t it be more accurate to say that it’s like a technology Swiss army knife though? After all, your phone keeps your contacts, your calendar and provides access to the entire web, our modern day encyclopedia. But most importantly, smartphone cameras have enabled us to capture everyday moments, from the mundane to the extraordinary.

With an advanced camera in the palm of your hand at every moment, will smartphones soon replace compact digital cameras for the average consumer?

The Birth of the Camera Phone

Those that were born in the new Millennium don’t ever remember a time when cell phones weren’t commonplace, let alone cell phones without cameras. The first phone with the capabilities to send a picture message was the Sharp J-SH04, sold only in Japan, in 2000. It had only a 0.11 MP camera! 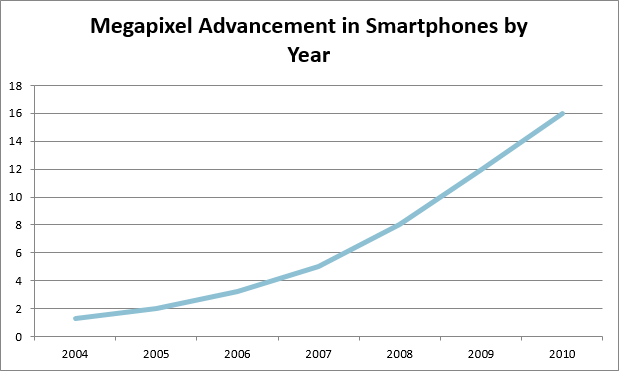 Sony, Samsung and Nokia continued to push the limits of the cameras their systems could handle. But those advancements also produced new problems. More photos need more storage – how would that change the design and impact the operating systems?

That’s why even when the first generation iPhone was released in 2007, it only had a 2 MP rear camera, and no front camera or video recording capabilities. While camera phones were advancing rapidly, cell phone software and hardware itself hadn’t made the same leaps and bounds.

With photo-centric social platforms, digital albums available at any time and mobile usage far surpassing desktop usage, the next question isn’t how many more megapixels can be fit into a smartphone, but how many do we actually need?

For Facebook, a 1200 pixel photo looks crystal clear on desktop and mobile. The latest iPhone’s Retina Display only has a resolution of 1920×1080. These dimensions and resolutions are well within the current capabilities of Apple and Android smartphones.

Professional photographers typically agree that 12MP is enough for their shooting needs – does the average consumer need much more when images are likely to be viewed at about half a megapixel? Considering images shot at 12 pixels are good enough for 5”x7” and some large format prints, perhaps 41MP is unnecessary for the average consumer.

While there’s no denying that some users require larger cameras, like news reporters, the average consumer can get by just fine with less. Where do your needs fall?

NUU Mobile focuses on building smartphones that match the performance of leading brands and use the most advanced technology, all while keeping costs reasonable. View our products and smartphone camera specifications here.