We rank the best people, moments, and memories from the #BABBQ15.

All good tech conferences must come to an end. The lights fade, the dust settles, and you’re left with nothing but a swag bag of whimsical tchotchkes and a “There is not enough available storage to ______” warning on your phone. Nostalgia stirs, swift and inevitable.

The pulled pork sandwiches were so thick and meaty they hurt the feelings of local vegans.

The Big Android BBQ 2015 may be over, but its memories will live forever in our hearts. Until next year, at least, when our hearts are upgraded with better memories (more explosions! more robots! more savvy insights about C++ development!). Is it 2016 yet? No? Waiting is the worst.

To help take the edge off, we’ve compiled a #BABBQ15 All-Star list — the juiciest tidbits from the world’s sauciest Android™ convention. Share and enjoy.

The BABBQ15 featured a smorgasbord of fascinating presentations. From the high-energy stylings of “App Standby vs. Doze” to the surprisingly lifelike “Building Your VR Sandbox”, there was no shortage of people standing behind podiums.

But the “Anatomy of a Phone Review” fireside chat with Russell Holly and Jerry Hildenbrand was truly sublime, as the two Android Central heavyweights guided listeners through a tour of the phone review sausage factory. When one sanctimonious attendee voiced his contempt for spelling errors, Russell and Jerry were gentle but firm. “We write millions of words a year,” they told the grammar fascist, “so basic math says we’re gonna make a few mistakes.”

As one would expect from a gathering of tech developers and smartphone enthusiasts, fashion was at the forefront of the Big Android BBQ. Notables included ticket-taking kid in a kilt and the dozens of convention-goers wearing threadbare Android™ beanies. The undisputed High Lord of Haberdasheries, though, was an IDEAA rep known only as “The Top Hat Guy”, whose vertically prodigious headwear and steampunk aviator’s goggles helped him stand out in a sea of branded polos and khaki shorts.

If anyone tries to tell you that sitting in the Swappa Phone Throne wasn’t his favorite part of the BABBQ15, you call that person a liar. Then you spit in his mead, and steal his wolfskin cloak.

He’s got the beard of a Northman, alright…

Facebook gave out free metallic vacuum flasks at their booth. The flasks were well-designed, easy to use, and highly addictive — many attendees seemed unable to stop drinking from them for more than a few minutes.

The pulled pork sandwiches were so thick and meaty they hurt the feelings of local vegans.

Would you believe that Cosmopolitans were the most popular drink at the Big Android BBQ? We didn’t, when we first heard the news. But after multiple confirmed sightings of “a kind of reddish-looking liquor in one of those skinny martini glasses”, it’s hard to remain skeptical. Cosmos über alles.

With so many attractions competing for their attention, some BBQers could be forgiven for feeling a bit overwhelmed. There were, of course, the requisite pool parties and secret coding competitions. But there were also viciously competitive MarioKart tourneys, and — best of all — a giant tricycle race.

If you’re too proud to ride an adult-sized Big Wheel, you’re dead to us. 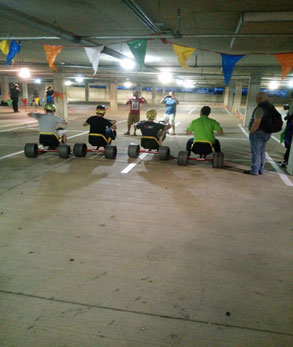 NUU Announces its First 5G Smartphone – the B20 5G